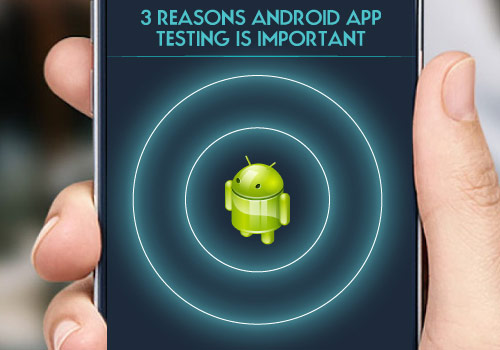 App testing is an important step before releasing any product to the Play Store or the App Store. With so much competition between different apps, you need an efficient team for Android app testing services in order to ensure success. For every app, one can find a number of substitutes. So, it is necessary to develop and release good quality products that are unique in their own way.

It is the most popular platform that has been accepted by several mobile device manufacturers as it is open source and easy to use. It has turned on to become the prime source to make sure all your personal and business needs and accomplished successfully. Once you get an Android device, you could make full use of it by installing from the large variety of apps in the Play Store. There are several high quality and user friendly apps to make sure your work is done in a jiffy.

In order to make an app successful, it is essential to deliver what the user requires. Every user expects a good quality app with no errors or bugs whatsoever. Since they are spoilt for choice, they will surely dump an app and move over to install another if they are not happy. Small bugs, slight errors, and a user experience below expectations could spoil your reputation and user base. This is where Android app testing services come in to the picture. The bugs and errors need to be traced and fixed before apps make their way to the App Store.

For the success of the App – A lot of effort needs to be put in to develop an app that is near to perfection. As such, it is not desirable that the end product is something buggy or full of errors and unwanted behaviour. As such, thorough testing is required to make sure that the app is working as desired with no issues. The code needs to be written carefully, and also testing needs to be done vigorously to achieve this.

Attract Users – It is a fact that error free apps with a good user experience can attract users easily. People prefer apps with good ratings and reviews on the Play Store. It is the initial nudge that is required. Once the ratings increase, it is automatically recognised in the store. Such apps receive a higher number of downloads and the chances of getting popular increase. This can be ensured with effective Android app testing. Such effective testing procedures help the teams come up with an error free app that could reach the top charts in the Play Store.

Advanced Testing – Manual testing comes with its own set of challenges. As such, testing teams now make use of advanced tools and methods that give you a bug free app. For this, developers need to first prepare a beta version of the app and release it to the testing team. The team performs all the testing procedures and runs the test cases to collect results and pass it on to the development team. Once the developers get the results they could make the necessary changes, if any.

There are a number of advanced tools available these days that make the whole process much simpler and faster. There are tools for releasing beta versions which could help the developers pass on the testing build really fast. The testing team could immediately get to work and get the results. Various testing tools could be used as per the requirements and scope of the app. Such advanced methods make sure that nothing is missed out, and one does not waste any time in the process. The end result is a bug-free app that makes the users happy and generates good revenue for the company.

Android, being a secure and popular platform, needs to be handled very carefully. You need to create apps that are bug free if you want users to use your app. Otherwise, it may just fail. As such, Android app testing services are not only recommended, but also inevitable for the success of your app. These days, there are several tools available to make it more effective. Use them to your advantage and make your app hit it in the Store.