There are a lot of new features that are being promised as part of the new Selenium 4 package.

For those who are still wondering what the new features and capabilities are that are being brought and how it will impact and improve your day to day work, then please read on.

If you are an automation professional you would already know that usage of the webdriver is not restricted to Selenium. 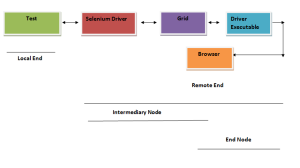 It is also widely used in appium and iOS drivers.
The latest version of Selenium thus comes with W3C standard which would make it compatible with the implementation of the webdriver across multiple platforms.
More details regarding the bindings and the protocols are available in the GitHub if you wish to dive deeper.

One major drawback which Selenium suffered all these years is that it does not support parallel execution.
Well, not anymore. With Selenium 4, they have plugged that gap. The new IDE supports a lot of new features and much-improved browser support.
This is apart from the robust record and plays options that have been built into the new version.
The new and improved IDE is completed dependent on the webdriver, which as mentioned above is also W3C compatible.

For those of you who have actually worked with the Selenium grid, you know how difficult it is to get the setup up and running.
There are so many challenges involved.
Hurray, the makers heard you. So now you have a much-improved grid which also allows you to run your tests in multiple devices at the same.
What is more is that in Selenium 4, the grid acts as both the hub and the node, thereby avoiding the issues arising out of connecting these together.

Another important update in Selenium 4 is with respect to the logging, debugging, observations, hooks, etc.
The latest version of Selenium promises to offer details of hooks, request tracing, etc, which help in better analysis of the problems and help in fixing them at a much faster rate.
It will also give the testers a better of the requests that are initiated, the hooks to which it is latched and much more.
With the new and improved analysis feature, the tester would be equipped with much more data to share with the development team for fixing an issue.

Documentation is a very important part of any tool.
It really helps in self-learning the tool as well as fixing some very common and basic things that we may have missed.
The latest offering of Selenium comes with very detailed documentation which is easy to understand, follow and implement.
You will not need external help again if you go step by step with the documentation available.
With more and more companies switching to automation using free tools, Selenium is the forerunner.
Though primary java it supports python as well…

The new features will definitely add more value to this product which now widely used not only by testers but also by developers.
Now with the alpha build out, it is very likely that we will get the official confirmation for release of Selenium 4 very soon. Waiting with the abetted breadth