What is Monkey Testing? Features, Types With Examples 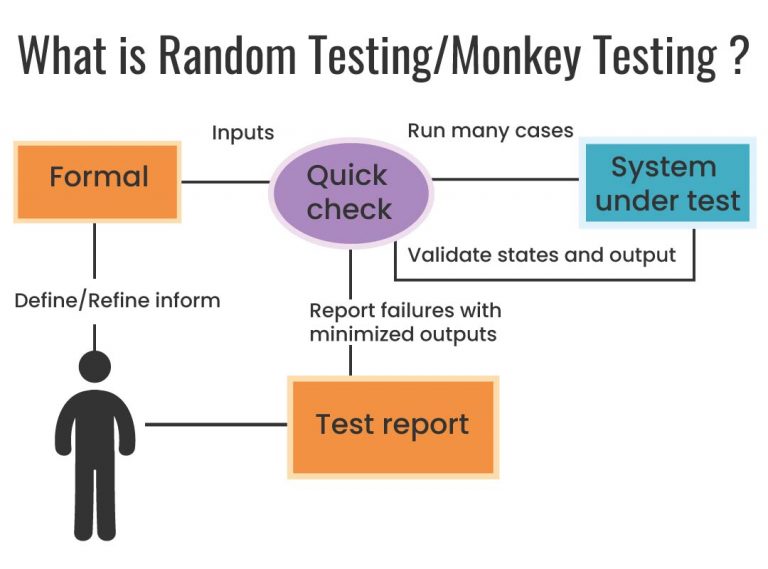 There are many names given to this testing pattern as Random testing, Monkey Testing, Fuzz Testing, and the technical name is Stochastic Testing.
This testing works well in case of androids, desktops, web and other mobile applications.
In this testing, there is no predefined strategy or algorithm and hence the testing works on tester’s gut and mood. Monkey testing is more efficient while doing stress testing.

It was first used in 1983 to test the software on Mac. These programs were Macwrite and Macpaint. The original Mac had the scarcity of memory. 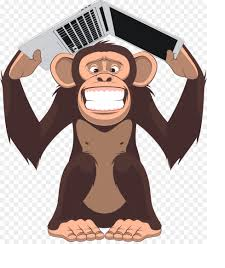 After the program was completely initiated, there was a lesser amount of memory left than required to perform the test. So Macwrite and MacPaint used buffers those were quite larger than the size of the screen of the desktop. So it became essential to create some testing method that acquired lesser memory.
So Steve Capps used Monkey program to enter random inputs to Macwrite and Macpaint. The Monkey functioned parallel to the other programs, data entry running in the system.
This would perform faster than a regular user as if a monkey was showing the swiftness in him. Hence the team decided to set up commands, window events, menu clicks so that it can target the requirements of the tester.
The term monkey testing was first seen in the book ‘The Art of Software Testing’ written by Glenford J. Myers in 1979. It is a very famous technique among software engineers.
Monkey testing is a software testing technique in which the operator provides the software with some random inputs in order to analyze the behavior of the software.

It also finds out whether the system or application will work properly under such conditions or crash. The testing is usually used by the tester at the beginner’s level.

Listening to the term Monkey Testing gives the vision of monkeys thumping on the keys of the keyboard and working as a computer expert, writing functions and other content.
All the random thrust on the keyboard may result in brilliant work as it may hit all possible combinations. It all may sound good. Going deeper into this theory, let us understand monkey testing.
Monkey testing is an automated test, which is done without any specification in mind. The main purpose of the test is to find out errors and bugs in the software to ensure the complete development of the product.

There are Some Other Features of Monkey Testing:

In this process of testing the tests are chosen independently from the test domain and are performed depending upon the tester’s requirement.
After the test, the team tries to replicate the error, once the issue is detected and fixed.
Monkey testing is categorized into three major kinds. Each of these focuses on different aspects of the programs and clears bugs from that particular genre.

Dumb monkey testing technique or ignorant monkeys, as the name specifies, inculcates a tester who has no knowledge of the application, its features, functions, working behavior or bugs.
They do not have any clue if the provided inputs are valid or invalid. It is the simplest testing which does not require the tester to know about the characteristics or qualities of the software or of the test flow.
The dumb monkey does not know the flow of work or the type of data being fed to the application or the system.
This determines fewer errors as compared to Smart monkey test. This test can catch the bugs that are harder to identify but are critically important too.

Smart Monkey testing is another variant of monkey testing in which testing is performed by testers or group of testers who has a deep understanding of the workflow of software/application
The smart monkey test is aware of the locations of test and is well aware of the page they will be redirected to.
In this type, the tester is more focused on breaking an application and when they find an error, they are aware enough to report the bug.
This is an ample example of load testing. The impressive part is that this type of test gives the tester quicker results than that of its counterpart.

The brilliant word suggests an advancement to the word smart. This is also true in case of these techniques, the brilliant monkey testing is an advancement in the smart monkey testing technique.
A tester or a team of testers is assigned for the task, ensuring that they have complete knowledge about this software domain and its functionalities.
Example: The tester who has sufficient knowledge of the banking sector may be asked to enter the banking domain’s data.

Monkey testing caters to the needs of an organization in chasing the out-of-the-box errors. It has both advantages and disadvantages as like every other entity.
Here are a few to add up to its advantages:

There are Several Disadvantages that can Overshadow its Positive Points:

There are many tools which make it possible to perform the automated test efficiently.
They are developed to generate random data so that all the faults and flaws can be reported in the application. The generation of monkey testing tools requires some good amount of efforts but once they are done, they perform efficiently with automation.

Monkey testing evidently, has differences with regard to the working of a monkey as it can completely analyze the function and will not do anything improper or irrelevant with the system.

The end user who uses any application or software is not expected to have the functional knowledge of the same. So by this testing, we can ensure the fulfillment of the needs of the user and decrease the probability of the awful breakdown of the software and system.
We can say that as it is not always possible to regenerate the bugs, it becomes almost difficult and sometimes impossible for us to reproduce the same found bug. It is very time-consuming work that requires a lot of effort, therefore we cannot recommend Monkey testing in the initial stages of the testing.
Later when the other test is done it can be opted to find the other issues such as the software and hardware issues, fault lines and memory leaks which are difficult to find in normal testing.
So we can say that one could opt for this particular kind of test if they lack in time and have performed other required test. Also one needs to ensure that the application is highly stable and can be reproduced as it focuses on the crash of the entire system.