Needless to mention, iOS is the official name of the platform licensed by Apple for its applications. And it is only through Apple devices that this platform allows applications to be installed and run. This is a sharp contrast to the Android operating system which authorizes other devices to operate its applications. Apple through its world-famous patented iOS platform makes its presence felt through devices such as the iPhone, iPad, iPod and iPad Mini. And these are the four devices that will demand the intervention of iOS app testing.

Tagged as an important characteristic for developers who churn out mobile applications provided by Apple, iOS automation testing comes with certain pre-defined objectives. Supporting a new instrument called as “Automation”, this is a type of UI testing that delves deep into looking into the functionalities of various applications teamed with Instruments that are tested for. Additionally, iOS Automation testing looks into the productivity of the JavaScript library. All in an attempt to authenticate an application, here is the rundown of the basic uses of iOS Automation testing.

iOS Automation Testing – A One-Stop Solution to a “Bug-Free” Application
Not withstanding the fact that it takes a lot of time and effort to design and implement an iOS application, a word of caution is to ensure that every application is free from bugs. Given the numerous common bugs, these errors when overlooked will adversely affect the functioning of the application. Below is the list of the number of ways in which the name and fame of the iOS platform and the globally-renowned features of Apple can be safeguarded, alongside meeting your quality standards.

Below is an iOS Testing Mind Map, a graphical representation of the different facets that the iOS tester has to keep in mind while subjecting an application to Automation testing. 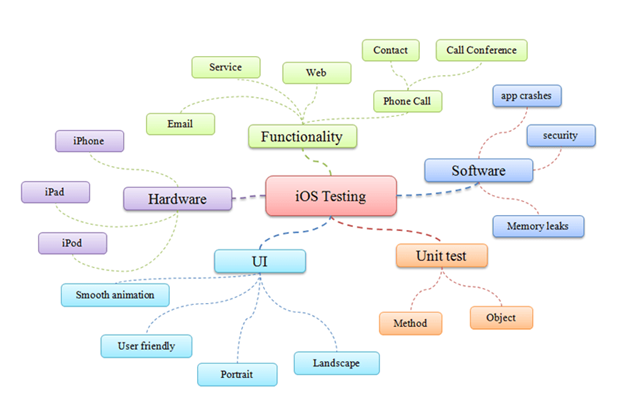 With the entire guidelines in place, you can create unit tests to verify and validate the performance of an iOS application through an automated and programmed manner. All for the sake of churning out a verified and fool-proof software, the iOS automation testing cracks the whip on data breaches and memory leaks that can damage the goodwill of Apple and its patented iOS platform.