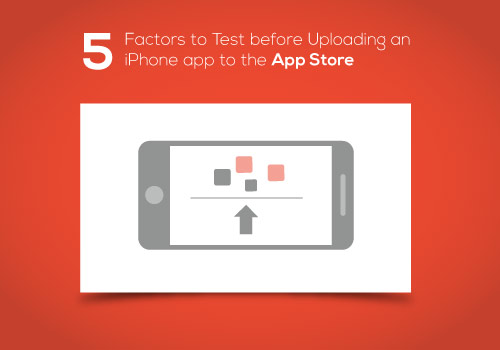 As everyone knows, Apple follows stringent rules and policies to approve an app in their app ecosystem. Apple has set such standards to provide high quality apps to their users.

iPhone App Testing Services and developers have to address many challenges because of the stringent policies of Apple‘s App Store review process. Sometimes your app may get rejected due to unexpected reasons. Testing services have to redesign the key features and this will force publishers to push back their launch dates.
Before developing an iPhone app you should know about the factors that may prevent your app from getting approved in iOS app stores.
Here are 5 factors to consider before uploading an iPhone app to the app store.

1. Avoid Publishing “beta” Versions (Apple Discourages Unfinished Apps)
As you might know, Google allows you to upload unfinished apps as a part of test launching your services. Unfinished apps are generally prefixed as “beta”. You might have seen such beta versions in Google Play store. Unfortunately, Apple does not entertain unfinished apps. They had famously rejected apps for being labeled as beta or preview. So, avoid publishing beta versions.
2. Loading… Time Matters
No operating system, whether it is Android, iOS and even Windows, compromises in app start up time. When it comes to iOS, they have strict norms regarding app start up time. If your app fails to run within 15 seconds, then the OS will kill it.
Differences in the environment, poor network connections, and slower devices may also slow down your app’s performance during the review process. For instance, your app may load rapidly during your local testing, but fails to pass the review process owing to varying environments. Besides testing on iOS simulators, test your app on some old iPhones as well. This will help you to offer quality user experience in all kind of devices.
Remember, users uninstall apps that take too much time to load…
3. Never Link to Outside Payment Mechanisms (Use iTunes Account)
iTunes in-app payment system is a unique feature of Apple. If you are selling digital content, all your transactions must be done through the iTunes payment gateway. This is applicable to all the digital subscriptions.
If your app is open for any other payment systems other than iTunes account, your app will be blacklisted and attract elimination from the Apple store. That’s why you cannot buy Kindle books via the Amazon app.

There might be Web pages linked to from your app, you should be very careful while linking Web pages. Sometimes Web pages use other mode of payment mechanisms and this will adversely affect your app. You might have heard that the Dropbox app was rejected by Apple owing to a payment mechanism issue.
So, make sure all your business deals go via user’s iTunes account.

4. Describing other Compatible Platforms (In App Store Descriptions)
Your app may be compatible with all the major platforms such as Android, Windows etc. You should never include the names of rival platforms of Apple in the app store descriptions. No company is going to appreciate their rivals in business. Always advertise the compatibility of your app on your website.
5. Icons and Buttons should be Used Properly
Apple never supports applications with bad user interface (UI). UI should go with the functionality or performance of your app. Before designing UI for your app you should go through with Apple’s Human Interface Guidelines. Make sure your app’s icons and buttons are standardized (consistent) in appearance and functionality.
Apple prefers apps which function in predictable ways. So, do not fix icons and buttons in the UI Button Bar System improperly.

We hope all these 5 factors will help you to develop a winning iPhone app. So, keep in mind all these factors before uploading your app to the Apple App store.