Do not Miss These While Testing a Game! 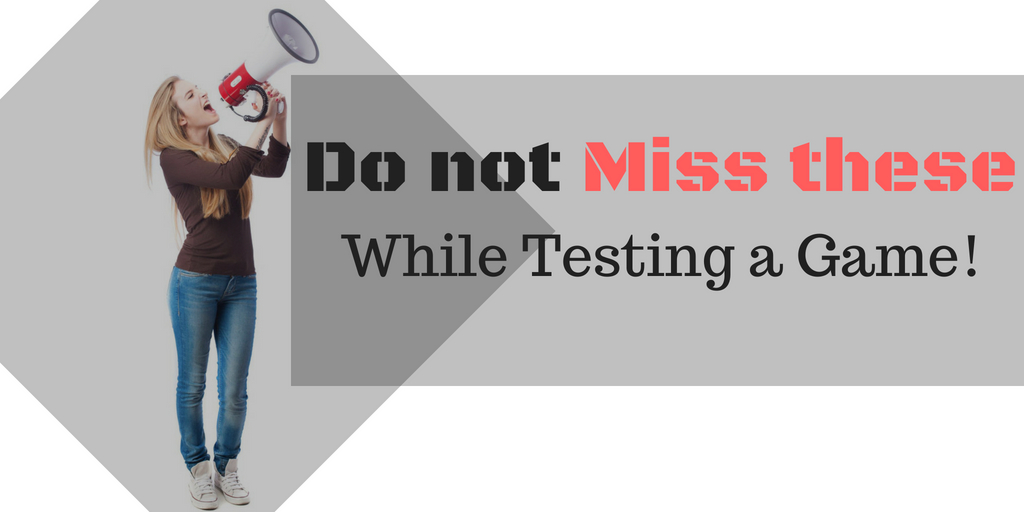 Gaming, be it mobile games, PC games or console games, is a multi-million dollar industry. Interesting as it sounds; testing video games is one of the most fascinating jobs every professional dream about. Hence, high-end level game testing is crucial to any game out there.

A well tested and executed game not only meets and exceeds the expectations of the player but also throws a lot of challenges towards the tester to make the game more interesting. It must also be tested for compatibility with the cross-platform without compromising on the player’s privacy and security.
Let us discuss some important things that you shouldn’t miss while testing a game.
1. Random Number Generator Evaluation (RNG)
Arguably the most important component for the gaming platform is the Random Number Generator, which determines the outcomes for a game. The component adds unpredictability to the game an maps its outcomes based on the user’s data.
The tester is expected to first identify the game algorithm to validate and verify the predefined rules of the game. The RNG must be adequately tested to avoid predictability which exists towards the outcome of a game.
2. Break the Game
Yes, you read that right. As a video game tester, you will have to find loopholes in your program by breaking it into parts. You want to root out any possibilities that might hinder the working of your game. For achieving this, you will have to be a little unconventional in playing and testing.
Games like VainGlory, which involves millions of combinations of player actions, will require you to interact with various objects and characters, with an endless sequence of the environment. Game testers must be keen in understanding these combinations and think outside the box.
3. Measure its Social Presence.
It wasn’t too back when Facebook introduced the first social media games. In 2013, with the launch of Wii U (and Miiverse that came with it), it was obvious that social media was going to play a crucial role in the Video Games industry. Today, video games are almost connected to every social media on the internet.

Social media can act as a double-edged sword for the video game testers. If used intelligently, it can serve as a platform for bringing like-minded people together and in a close-knit community. So make sure that as a game tester you have to measure the proper social media presence which may bring some interesting demographics that your game is targetting.
4. Keep the Secrets.
Being a game tester, it is required that you honor the non-disclosure agreement and demonstrate the ability to keep secrets. Many times, a game tester posts an alpha version of the game which is in violation of the NDA. This might lead to cancelling the project and cutting the company’s losses.
If by any chance you happen to appear for an interview that asks you to describe a question regarding the security of its game, you may straight away refuse as it’s under the NDA.
5. Evaluating the Game Rules
Testing any video games requires you to verify the game environment and behaviour. It also includes the game texture, elements, stability and games messages. As a tester, you need to evaluate how every aspect of the game including how each one interacts with the other. This is often neglected by majority thinking these are issues beyond the development phase.

The game needs to be thoroughly evaluated to deliver maximum gaming experience for end user. Hence, the testing phase focuses on some crucial part and breakdown to achieve realistic game behavior.
Conclusion
No product is perfect without testing for the product to the launched in the market and it applies to video games testing as well. With the enormous network of games emerging in the market every day, your game has to be tested to see how it withstand real-time concurrent load before released. Game testing is done to achieve consistent performance across all hardware/software/platform/device combinations that your target audience might use.
Technology never stops evolving and the gaming industry is always at the forefront. Hence, when recruiting for a gaming tester, the employer usually specifies what he is looking for in the desired position.  So if you have the passion for games and a good understanding of various testing methods, it isn’t difficult for you.