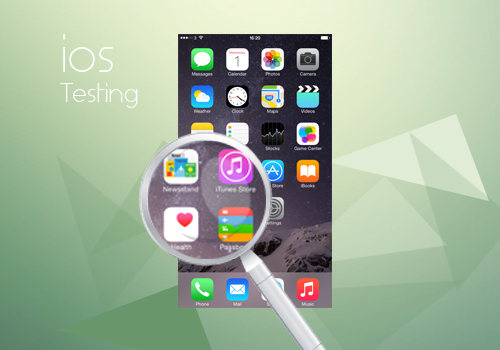 There is no doubt about what iOS has done for mobility gaming. The exquisite functionalities coupled with a simple user experience have paved way for the ‘mobile era’. In spite of this, working with the iPhone/iPad mobile application for software testing and monitoring can be challenging.

Challenges and complexities surrounding iOS mobile testing continues to interfere with development even as iOS app market continues to produce a record growth. One of the greatest challenges is in Apple iOS being a closed operating system when compared to an Android OS. The development and app testing stages for a closed system is far more complex, since extracting the necessary data from low level objects is impossible for users. This is crucial for test automation.
The best approach to get the necessary access to these levels of an iOS app testing are rooting (jail-breaking) and compile-time source instrumentation. But nothing can match a cloud-based hybrid approach which can offer developers and software testers the necessary coverage, capabilities and flexibility to deliver better iOS apps.
Rooting (jail-breaking)
These are the two common methods used in today’s mobile testing industry to address the challenges of inadequate access to the low level objects. These are rooting and source instrumentation.
The process of removing the limitations placed by Apple on the iOS devices is called jail-breaking. This helps achieve low level (root) access to the operating system, thus allowing testers to recognize objects within the application being tested.
Source Instrumentation (compile-time)
Compiling the application that is being tested with an additional piece of code to get a back door access to the low level OS for object recognition is referred to as source instrumentation. These codes help testers to execute low level calls and get the Object ID’s from the operating systems without the need to root or jailbreak the device.
The decision on what approach should be adopted depends on several considerations like SDLC process used, corporate policies, application under test, frequency of testing and many more.
Comparison
The jail-breaking approach is less suited in situations where customers need a quick test for a new iOS version or a new iOS device. In such cases, even though additional codes in the test application will complicate the SDLC, compile-time method is preferred.
The advantage of jail-breaking a device is that it lets you test the application with the exact same code by which it will be released. In compile-time before store submission, the “back-door” will have to be removed or they will be exposed to serious security issues. Jail-breaking therefore eliminates the need for compilation and intrusive operations which avoids any risk to quality.
While using a compile-time approach companies should also consider possible regulations (such as HIPAA) which implements testing on the final binary version and not on debug or test friendly version.

The Hybrid Approach
The combined (hybrid) approach lets you choose your iOS app testing methods depending on the nature of your application, project needs, and policy. Deploying and securely managing the test devices in a “private cloud” guarantees that a jailbreak does not introduce any risks or abuse to the platform for non-testing purposes. Such jail-broken devices are used only in a closed and secure testing environment for testing purposes only.
Since the use of visual analysis may pose to be insufficient, a strong object recognition capability is mandatory for testing a mobile application. For example, the OCR technology can detect UI issues and glitches on the test devices while its heuristic nature makes it incapable of ensuring 100% accuracy. On the other hand, a low level object can easy miss the obvious qualifications that a visual analysis could easily detect. That’s why an analysis using a hybrid approach incorporating both visual and native object can be instrumental for covering all mobile business cases.