People are not so positive on QA even if they know how important it is for a software nourishment. A step of testing is avoided more often than not to save on budget.

Remember, branded products always come with standard price; but, why….? Because of the quality they assure.
We all have heard the proverb “all that glitters is not gold.” Likewise, no matter how beautiful, trendy and charming your application design looks, it is not going to bring anything good
if it doesn’t provide the expected quality.
As a user, you would definitely go for a better option if the expected application goes on loading for more than 5 seconds. Believe me, some of the users won’t even wait for 2 seconds. A book series can be written about the customer dissatisfaction experiences on the applications. Remember, a user once lost is lost forever.
The purpose of testing is not always about finding the errors, but, it is also to make sure the application works properly.
Does it functions well?
Is the user satisfied?
Does the application work as developer expected?
The best stairway to perfection is always questioning the possibilities. Testing is a mixture of techniques and methods; there is no simpler way to make sure the working status of an application. For every execution process, we need a plan.
Here, we are going to discuss about 17 different approaches that can be applied for testing iOS and Android apps.
General strategies
1. Let the QA tester belong to the core developing team.
Generally, companies have a waterfall way of processing an application. In that case, testers will get busy with in a week of starting the project. But, in the agile method of working, QA is an important part, which the team considers as an essential ingredient for the success of the project. When a tester gets involved, he/she will be well aware of the development taking place and be sure about the part in which improvements are needed.
Also, approach it, considering the design and user expectation.
2. Ensure the test scripts
There are people who think, ‘QA is not that important, let’s just ensure performance’
Can you believe that people actually think like that even at this time of hectic competition? Also, it’s not as simple as testing everything casually. A pure, complete knowledge on function should be there and the required data should be provided to the tester for a complete logical testing.
The product team has to make sure that the scripts provided are understandable by the tester.
It should be made simple for any programmer to understand.
3. Functional testing
· Do the features work?
· Can user complete the task?
These are the two main questions we need to find the answer for explaining functional testing. The tester will work along with the procedures of the application so that he will understand the performance and the flow of to and fro pages.
4. Unit testing
Unit testing works in relation with codes. Usually, developers do this. Codes are mantled, separated into different parts called units and tested thoroughly. The unit referred here can be a code module or a function.
5. Performance testing
Testing is all about improvisation. So, performance testing is done to make sure that no delay in performance of application happens as the result of improvisation.
Here, the testers monitor the speed and how well the application responds to features. Time consideration is also a factor involved in performance testing along with
· Data consumption
· Battery duration
· Space consumption
· Navigation
· Network coverage etc.
6. User acceptance testing
The term ‘User acceptance testing’ is a wrong term because we don’t have an actual user. Instead, we select a group to conduct the test.
We can’t just go on and ask people to take part in this session since it takes time. So, we seek the help of our colleagues. A group from inside the company, who may or may not be a part of this application development, will take part in this testing.
Usability testing is usually considered as a final step in the case of websites or applications,
Steps followed in usability testing are:-
1. Planning
2. Selection of group
3. Explaining what is expected and what is not
4. Introducing main scenario
5. Testing specification, bugs
6. Sign off
7.Manual Testing  vs Automated Testing
Machines are faster; that’s why it is better to make QA tests automated. It is because computers can find anything that does not work, faster than the human brain can.
It simply saves money, time and provides more accuracy.
Yet, not every QA task cannot be completed by computer. Sometimes issues occur, that are too awful for software to complete.
8. Load Testing
Load testing is a lot of work. It is checking the user capacity that an application can hold to make sure that the application loading will not be exhausted in an expected number of user logins.

Basics of load testing
1. Record the traffic
2. Replay the request
3. Analysis
9.Regression Testing
Regression testing is like marvel movies. Interesting, huh?
The hero gets unusual power, use it stupidly, but, at the end, he realizes that he can make big changes.
Even a small change in code can error the whole application. So, regression testing helps in ensuring that the changes made doesn’t affect the flow of the application.
10. Device Testing
Mac and Windows are usually considered for device testing,
That’s something cool about device testing. There are over 24,000 models that exist in Android itself. 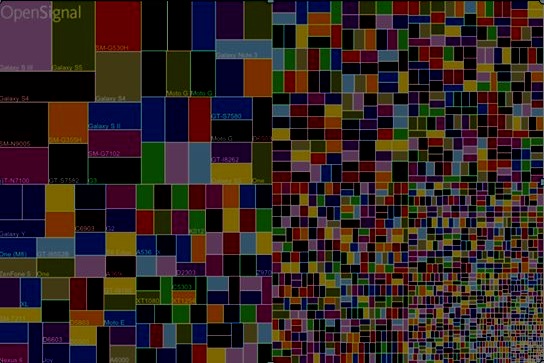 This is a bird eye view of android screens that presently exist.  (source)
Deciding which screen size application is optimized is more important here. Having a clear company policy will help testers to ensure that the rules and test selected rather than all supported devices.
11. Testing Interruption
Interrupt conditions are mainly the interruptions that occur while the applications are running.
It includes incoming/outgoing calls, text messages, notifications etc. In the cycle of applications when disturbances happen, interruption testing tells applications how to behave properly.
In short, interruption testing is just like teaching good manners to a child, “behave boy” 🙂
12. Crowd source Testing
Crowd sourcing is simply recruiting a specific group through a third party. When a developer wants to test a product, he contacts any agency that provides a collective group which is suitable for testing product. This agency will collect the record and give the developer a result.
In mobile application, crowd sourcing is becoming a latest trend.
The agency and the group get paid according to the bugs they find.
13. Connectivity Testing (Network)
Since digitization is taking over the world, we are provided with plenty of connectivity carriers.
We may run out of daily supplies, but data connection! Never.
So, what the tester has to make sure here is, how applications respond to various data carriers, especially, 3G 4G, LTE.
Testing on popular data providers would help to ensure the performance of applications since they will be the widely used networks. Also, testing how applications work when data loss or weak connection happens may help.
14.Emulator Testing policy.
There are many emulators now that developers use effectively to test any application.
Browserstack.com is the most popular among them.
In a tester’s perspective, you would want experts to test in one or more devices, on most popular versions of Android and iOS but testing in different devices, screen sizes, and OS versions can be done through emulators in order to save money and time.
15. OS version: Testing and Support
iOS and Android have significant OS versions in existing markets. Also, we have to agree that iOS is better than Android. It is the main reason why many companies are advised to develop applications in iOS initially.
Android doesn’t have complete power on the available versions provided for the users. But, apple has complete power on the users and provided versions since they manufacture both software and i Phones.
16.UXA Testing
UXA stands for user experience assessment which takes an account of skills, methods and tools used to identify how much aware the user is about the application.
UXA is categorized into three:
1. Implict
2. Explict
3. Emotional/Creative assessment
Various reasons can be pointed out for why developers always fail to replace the functionality as designers outline it. The variations that occur between UXA and software may be too small but noticeable. But, the eye of a good tester should be like a hawk, catch prey at instant.
17.Security Testing
‘According to 2017 application security report published by cyber security ventures, 111 billion new software code lines are being developed every year
Hope you all understood what we are going to discuss now.

One of the main reasons that security testing should be done is to secure user data. Whatever data user provides should be encrypted and should never reach in bad hands.
That’s a duty, moreover a responsibility. Data leakage is an issue that happens commonly. Therefore, make sure that the data transfer is done through proper channel.
‘It’s a wild world out there’.
Source